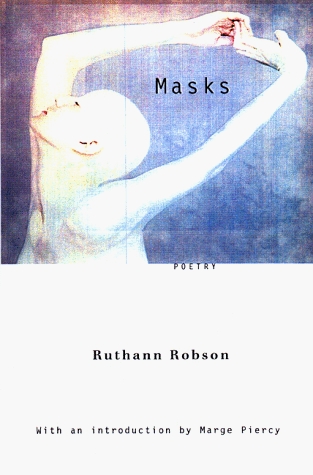 Masks: With an Introduction by Marge Piercy

Best Poetry of 1999-Library Journal Well known by readers of gay and lesbian fiction for her award-winning short story collections and novels; notorious in the legal profession as the nation's "foremost authority on lesbians and law" (Village Voice), a professor at the City University of New York, a young mother raising a son, Ruthann Robson's breadth of experience is unique among American poets. With seamless use of poetic craft and ironic wit, Robson tackles subjects as political as they are bizarre: the young woman chained to a radiator by her mother to keep her safe from harm; the teenager who gets herself knocked up because it's less dangerous to be an unwed mother than a lesbian. Affecting, terrifying, but always bathed in a clear hard light, these poems introduce a stunning intelligence and a bold new voice in American poetry.

"Ardent, passionate, and exquisitely queer…Robson's sense of playfulness is wonderful …The poems in Masks are startling not only for their quirky, often whimsical, humanity, but also for their imaginative use of form… There is history in this book. Witch burnings. Concentration camps. Poverty. Robson covers terrifying, white hot terrain with unflinching honesty and a poet's heart… She takes the magnifying glass of poetic language and investigates detail by detail every aspect of the female condition."-Lambda Book Report

"Another excellent book of poetry from 1999, Masks reveals how time and the moment of vision drive the poet to turn upon experience and make language out of it. These impressive poems swallow any distance between maker and reader as they pass from the glories of relationships to the price of loss. Some of Robson's best work is poems about famous women such as Frida Kahlo, Alice B. Toklas, Diane Arbus and Isadora Duncan. This is a truly marvelous collection that haunts the reader and never diminishes the art of the poem."-Bloomsbury Review

"Robson gives you more than you bargained for...Her first collection of poetry is terse yet throbbing, filled with the raw, aggressive energy of someone who can't be bothered with niceties...there is definite craft here: these lines aren't just thrown out but clearly thought and ret