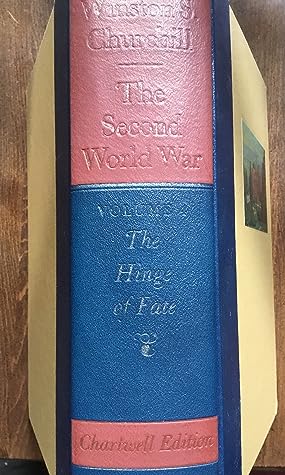 The Hinge of Fate

Winston Churchill's six-volume history of the cataclysm that swept the world remains the definitive history of the Second World War. Lucid, dramatic, remarkable both for its breadth and sweep and for its sense of personal involvement, it is universally acknowledged as a magnificent reconstruction and is an enduring, compelling work that led to his being awarded the Nobel Prize for literature. The Hinge of Fate describes how the tide of the war gradually turned for Britain and its allies from constant defeat to almost unbroken successes - Japan's successful assault on the Pacific, Britain's attempts to aid a beleaguered Russia and the defeat of Rommel at the Battle of Alamein.

The Sleepwalkers: How Europe Went to War in 1914

Countdown 1945: The Extraordinary Story of the 116 Days that Changed the World

The Hinge of Fate Reviews

Sir Winston Leonard Spencer-Churchill, KG, OM, CH, TD, FRS, PC (Can) was a British politician who served as Prime Minister of the United Kingdom from 1940 to 1945, and again from 1951 to 1955. A noted statesman, orator and strategist, Churchill was also an officer in the British Army. A prolific author, he won the Nobel Prize in Literature in 1953 for his own historical writings, "for his mastery