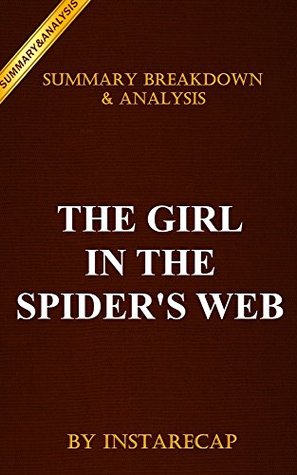 The Girl in the Spider's Web: by David Lagercrantz | Recap and Analysis

David Lagercrantz tells a gripping of international intrigue, electronic snooping and betrayal crackling in the ether of today’s blindingly fast-changing, and sometimes , indecipherable technology. It brings back two memorable characters from the blockbuster trilogy by the late Stieg Larsson; “The Girl With the Dragon Tattoo”, “The Girl Who Played with Fire”, and, “The Girl Who Kicked the Hornet’s Nest” . Like the three books, “The Girl in the Spider’s Web” is translated from the original Swedish language, and most of the action happens in and around Stockholm.

Lisbeth Salander, the brilliant anti-social hacker once again teams up with Michael Blomkvist, a relentless reporter, to help infiltrate a murderous technology organization with links to powerful corporations, law enforcement agencies, and nothing less than the the United States’ National Security Administration, or NSA.

There appears to be a distinct difference in storytelling between the three Larsson books and Lagercrantz’s Spider, which can be attributed to the subject matter on hand or the writer’s style, and maybe even both. Larsson seemed to let events unfold slowly, since he did, after all, have three books to gradually introduce us to, and develop, the characters especially Lisbeth Salander. Some critics decry Lagercrantz’ narrative as fragmentary and confusing, with dozens of characters in a wide array of backgrounds: journalists, spies, hackers, law enforcement officers, scientists and of course killers, who at times seem to briefly emerge, vanish, and then turn up again.

Then there is the sometimes arcane language of hacking, cryptography, physics, and artificial intelligence, where there are complicated moments when the characters discuss such prime-number factorization (PNF), self-teaching algorithms, singularity theory, black holes, prime-number factorization and black holes. Many of the characters are indeed geniuses and Lagercrantz mostly succeeds in allowing the science to be decipherable.

The original trilogy’s anti-heroine, Lisbeth Salander, isn’t much seen in the first half of the book, but is quickly inserted into the action, and of course, turns into the main focus of events. Most of the characters from the original trilogy show up in the book, including the shadow of Lisbeth’s horrendous dead father, Zalachenko, and the traitorous Hans Faste. Two new compelling characters are introduced: Camilla Salander/Zalachenko, Lisbeth’s evil twin, and 8-year old August Balder, and autistic savant and mathematical genius, who shares most of the spotlight with Salander.

The action is fast paced and the characters, many, and like the first three Larsson novels, may be a tough read to put down.

Download your copy today!
for a limited time discount of only $2.99!

Readers Also Enjoyed The Girl in the Spider's Web: by David Lagercrantz | Recap and Analysis

Harry Potter and the Goblet of Fire

The Girl Who Lived Twice (Millennium, #6)

The Picture of Dorian Grey

The Adventures of Sherlock Holmes

The Girl in the Spider's Web: by David Lagercrantz | Recap and Analysis Reviews

Treacherous Love The Dyslexia Empowerment Plan: A Blueprint for Renewing Your Child's Confidence and Love of Learning The Half Killed Buddhism Lead Like a Pirate: Make School Amazing for Your Students and Staff Endless Possibility Aiden: House of Flames Half Magic The Wolf and the Dove The Struggle for Europe